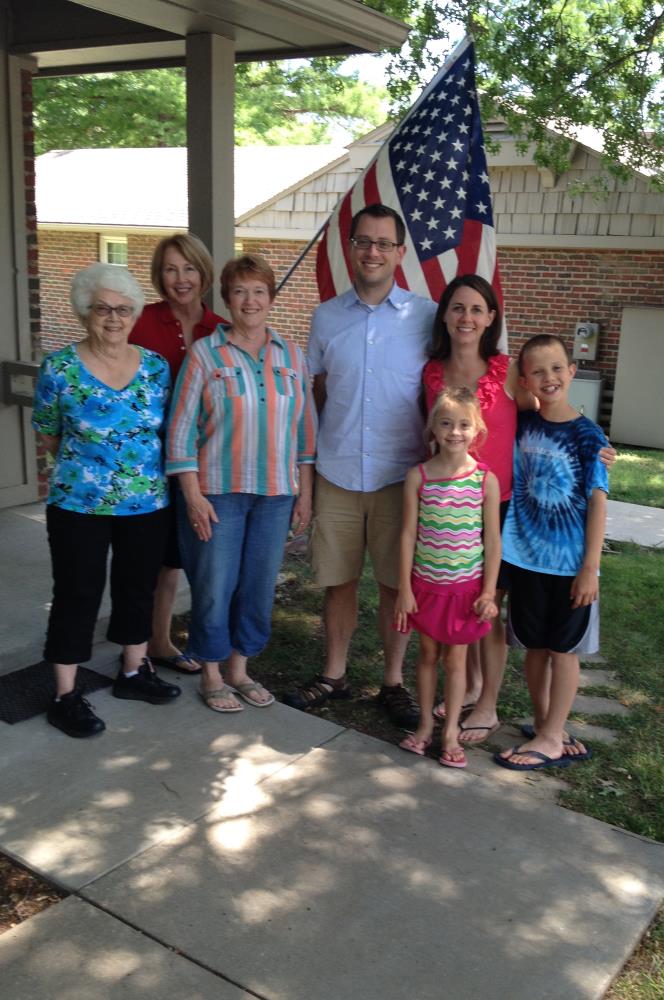 We were thankful to be able to celebrate the Fourth of July with family we haven't seen in a while. My uncle, aunt, and grandmother live in Topeka. Another cousin and her family live about an hour from there, so when we were originally planning our trip, we were hoping we would get to see each of them. We didn't know that my aunt from Denver and her husband, my parents, and another cousin who lives in New York would also be in Topeka for the holiday, so it was wonderful to get to spend time with all of them.

We arrived in Topeka near bedtime, not long before my parents arrived. J. and Luke went to stay in a room at the retirement community's "big house" which included breakfast the next morning. Lauren and I slept in the basement at my Grandmother's. In the morning I was treated by my thoughtful grandmother to a relaxing lavender Epsom salt bath. We got ready and hurried to see the parade at Brewster Place. I am used to the very large Grandville, MI Fourth of July parade that lasts about an hour and provides each child with at least a pound or two of candy. I had to giggle at the parade that consisted of 20-30 delightful residents and was beautifully short. The recorder version of Yankee Doodle and bells made this parade even more precious to me.

My Uncle Ed, Aunt Noreen, cousin Kayla, her husband Caleb, and son Hudson came over and it was great to see them and catch up for a while. After they left, my parents piled into our truck with us and my mom gave us a tour of Topeka. It was fun to see the capitol building and some other landmarks of her hometown.

We had lunch at Spangles, a 50s style diner. It was fun to learn that my cousin, Alaina, was in a TV commercial for this restaurant when they opened. When we got back to Grandmother's home, my Aunt Nancy and Uncle Dave had arrived and it was wonderful to spend some time visiting with them.

Our last stop in Kansas was going to my Uncle Ed and Aunt Noreen's home to see my cousin, Alaina, and meet her new husband, Matt. We also got to meet Noreen's sons, Tony and Matt and his girlfriend, Leah. It was great to relax and enjoy conversation with all of them before we headed back to Eagleville, Missouri for fireworks.