The Danger of Doing Something 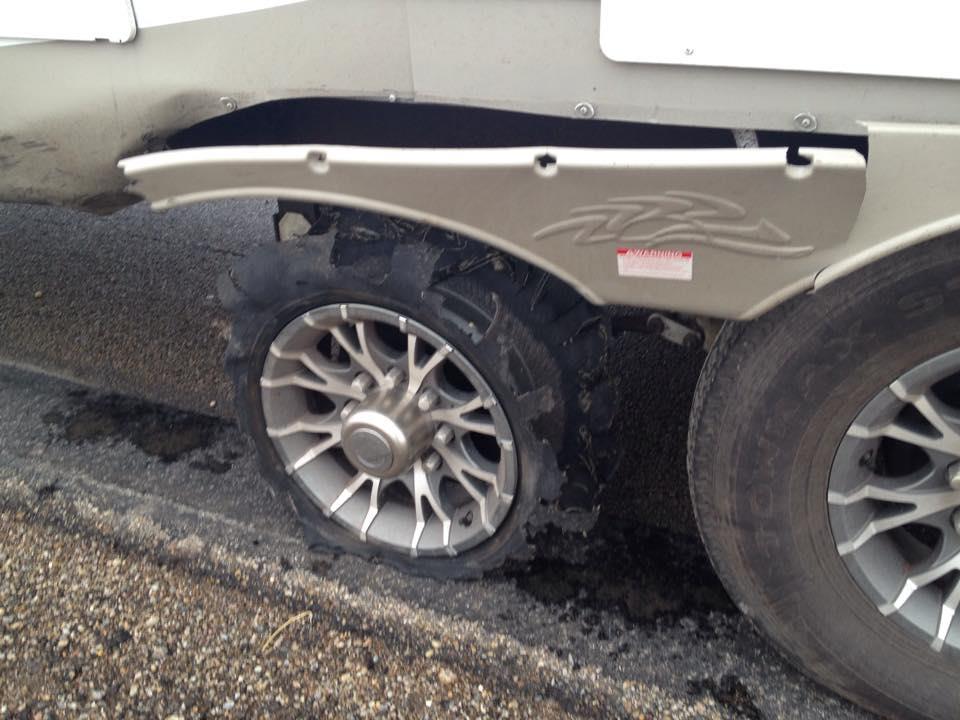 Last weekend we had one of our longest and most difficult travel days of the trip so far. In addition to a larger-than-advisable number of miles for one day, we also had to drive through terrible road conditions and a "winter weather advisory" for the first few hours. In short, it was the slowest, most dangerous, and most tiring driving we've done with the RV to date.

After several hours, we finally reached a lower elevation and the air temperature got above freezing. As snow and ice sloughed off the RV outside, so did the stress of the day for us. We were in the clear! Or so we thought.

A sudden honking and swerving of the car on our passenger side alerted us to the fact that a tire was blowing out on our trailer's rear passenger side wheel. Chunks of black rubber were flying in every direction. What remained of the tire flopped around in quick circles on the hub, shredding the side of the RV's skin. After some evasive maneuvers, we were able to pull over onto a skinny shoulder along the edge of I-40. I stopped the truck, paused the podcast we were listening to, and we all caught our collective breath. Immediately, we felt thankful that everyone was OK, and our moods were still high as our thoughts went to the special, RV-only roadside assistance package we had purchased. We also noted that we were just inside the city limits of Amarillo, Texas, and therefore help wouldn't be too far away.

After 4 hours of sitting on the shoulder, rocking back-and-forth with the gust from every passing semi, our optimism was fading. We watched dinner time come and go, still with no help in sight. When help finally did arrive, we probably intellectually understood that things could still have been worse, but our moods certainly couldn't have been.

As I mentioned, no one was hurt, and the damage was mostly felt in loss of time and an as-of-yet-unknown amount of money, but it still felt like life was really piling it on us that day. While waiting for help, I found myself thinking that life at home sure was a lot easier--though I doubt that was true--and that if we just left the RV in one place longer, we wouldn't run into this type of problem.

We spend the whole following week resting and relaxing with friends in Oklahoma. After letting the experience sink in and thinking about it more, I realized that my initial inclination toward doing less was probably wrong. My newly refreshed and rested mind went to the old saying:

"Nothing risked, nothing gained".

I probably wouldn't have gotten a flat sitting still that day, but if we hadn't ventured to move the RV that long distance through difficult conditions and over the tire-popping debris of Amarillo that day, we'd have forfeited the priceless opportunity to spend that restful and rejuvenating week with our friends in Oklahoma. I suppose the same lesson applies to this whole trip in general. Even if I was right about things being easier at home, the experiences we're having this year outweigh the risks. I can't say I'm glad we hit that debris in Amarillo, but given the same choice to stay or to go, I'd go for it all over again.